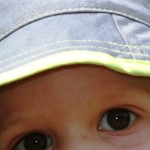 MIB was about 3 months old when the first signs of eczema appeared on his cheeks.  At six months we realised that it was more than just ‘dry’ or ‘sensitive’ skin.  Over the next year it became clear that there was indeed more to it.  He was diagnosed as having atopic eczema, allergic to dairy and eggs, intolerant to soya and likely allergic to stone fruits and latex (it’s hard to get these tested, but the reactions are fairly conclusive).  Last year he had a mild anaphylactic reaction to peanuts.

Both of us parents have family histories of allergies and eczema although neither of us are affected on a daily basis ourselves.

Our lives were transformed after one visit to a dermatologist.  After having to fight with several GPs to get referred we were so pleased that the dermatologist agreed that we should definitely be there.  They showed us how to bandage MIB’s legs (which made a huge difference in just 24 hrs) and prescribed Epaderm and two steroid creams.   We were given careful instructions on how to use everything as well as showing sympathy and understanding that we had never seen at our local surgery.  They also gave us a number to call to ask further questions and to smooth the prescription transition at the GP’s.

Having MIB has been extra work and stress for us as a whole family.  Although it does not take over our lives, it is a different life.