This time last year I began to realise how hard it is to find school uniform for an itchy child.

For us, having an atopic child who suffers eczema on a daily basis, the search for one pair of cotton school trousers can be a nightmare. Unlike most families we can’t pop to the local supermarket for a selection of uniform in different sizes and styles and have it all sorted in one trip.

Finding out who stocked school trousers that didn’t contain any polyester or special coatings narrowed us down to Marks & Spencer skinkind™ range. We bought three pairs in the relevant size, taken up and the adjustable waist tabs pulled tightly (child with restricted diet and too many steroids!). Finally we were ready for the start of term!

Well, the elation of finding some school trousers for him was short-lived. 100% cotton really doesn’t survive the day well when it’s covering emollient-covered legs and crawling around the classroom floor. Early in September I noticed that my son was the one who came out at the end of each school day looking crumpled. Line him up with a bunch of Teflon-coated-trouser wearing classmates and ironically he looks like the kid whose parents don’t care about the state of his uniform. And that’s before the first hole appeared.

The first hole in his trousers appeared around February. Fair enough, he only had three pairs in rotation and try as we might, between emollients and climbing on walls on the way home and pasta sauce for dinner, it was rare for a pair to make it through one day let alone two. So, the laundry rotation was short, with a hot wash in between (see earlier mention of emollient usage).

After a hole appeared in the left knee* of each pair, we began once again to search every website ever known to sell school trousers to find more pairs of the same, 100% cotton, grey trousers. Finding the right material in the right size is hard enough in peak school uniform buying time, but mid-year, it’s a real struggle! 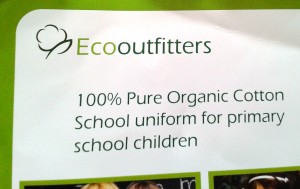 Imagine our delight when Everything for Eczema offered MyItchyBoy the chance to try a new pair of 100% organic cotton school trousers. They promptly arrived and were pressed into immediate service. From the outset I was impressed. The new trousers are made from a soft cotton, but have a sturdier feel to the material than the M&S ones. This helps them keep their shape much better by the end of the school day. Unlike the M&S skinkind™, there is a label in the back of the trousers but it is in a sensible place and it does include a space for the child’s name. 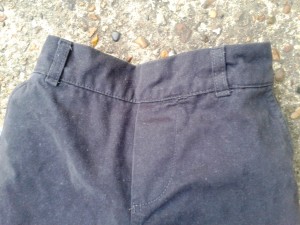 he hem is nice and smart, although I found them a bit harder to hem using iron-on tape (no sewing machine ability here). We got MyItchyBoy’s size in age but they are cut rather generously – especially in the leg length. They have washed well – no sign of fading on the knees as yet, which happened early on with the other ones , ironed well and MyItchyBoy certainly finds them comfortable to wear.

Overall, I would recommend these trousers for school and I definitely prefer them to the M&S ones.

*These have now been made into shorts with the magic of hemming tape.

We were given a pair of Ecooutfitters trousers by www.everythingforeczema.com for the purpose of testing and reviewing.  MyItchyBoy will continue to wear the trousers to school.