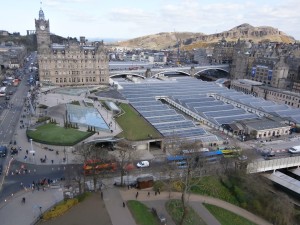 years have gone by since we last visited and MyItchyBoy could no longer remember going. A train was booked, accommodation sorted and suitable entertainment found to keep a 6 year old amused on a four hour long journey.

Arriving in Edinburgh in the afternoon of Good Friday we opted for the easy option of Wagamama’s for dinner.

After a short bit of early morning sightseeing on the Saturday, we decided we needed to go in search of some brunch. We were in the Royal Mile at the time, so it was harder than it may have been in other areas of the city. We spotted the Garfunkels and decided that since it is a chain, it would be clued up on allergies. Besides, we know what tomatoes, mushrooms, bacon and beans are made of. We know MyItchyBoy can’t have a cooked egg. All we needed to check was what oil things were cooked in and if the sausage contained dairy and we’d be sorted.

Or at least, it should have been. When ordering, we asked about the sausage and what oil they used for cooking. The waitress blanched, told us to wait while she went to get the iPad-looking device*. She told us if we have allergies we have to use it and she could only take our order after we’d used it. She didn’t show me how to use the app but it was one of those where you put in what you can’t eat and it shows nothing but a side of fries and a tomato.

She left us with it and then the manager appeared to try and ‘deal with us’. He told us we had to use the app and it would show us what was available (he also did not offer to show us how to use it). I explained that we just wanted to know if the sausage contained dairy and what the food was cooked in. Answer: Use the app.

Me: But don’t the new laws say you have to tell me if there’s milk in the sausage?

Him: Use the app to see what you can eat.

Me: Ok, leave the sausage, what are the mushroom and tomato cooked in?

Him: I don’t know, the oil is in the kitchen.

I explained that the app only told me the ingredients, not what the food is cooked in. I asked why it was too hard to go into the kitchen to see what they were using to cook the food. Apparently this wasn’t possible. I offered to look myself, but that wasn’t allowed either.

I would like to think it was a one-off, that they were just not trained up yet in that one particular outlet. We won’t be trying them again to find out though.

Hungry and now in a hurry due to our appointment with the hire car company, thankfully we came across the British classic: the BHS café. At half the price of Garfunkels it turned out to be more than just good value.

It is the kind of service where there is someone dishing up from individual metal trays so cross contamination seemed less of an issue (might just be in my head though). The woman behind the counter brought the bottle of oil out to show us. She also brought out laminated sheets for each individual breakfast item (including three types of sausage) detailing any allergens present.

She even used her common sense in helping us get MyItchyBoy a plate full of sensible (as sensible as a cooked breakfast can be) food**. MyItchyBoy was over the moon and openly praised the service for all to hear. Understanding, common sense and customer service. Can’t beat it.

We played it safe with Pizza Express and home cooking while up in Fife. However, when we returned to Edinburgh, tired out from wonderful walks on sunny beaches we decided to try the Zizzi just around the corner from where were staying. It was early and there was only one other table taken. We’ve not been to one before, but the allergy menu looked good, clear and there were tasty-sounding choices for me and MyItchyBoy.

Sadly, MyItchyBoy had a reaction to his meal. It wasn’t immediate and thankfully it was not serious – antihistamines were all that was needed. I have since emailed Zizzi to see if I can find out what might have been the cause. They have not yet replied.

The day after, MyItchyBoy told me that he had had some itching in his mouth while he was eating his pasta, but that he has that sometimes when he is eating food he knows is ok for him. We have since talked to him about the importance of telling us whenever he feels itchy in his mouth so we can decide whether it is important or not.

With one night to go, we went back to Wagamama’s to avoid any more surprises.

Eating out with allergies now 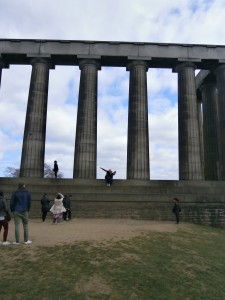 As far as eating out since the new regulations have come into force, I don’t think much has changed for us. Sticking to the old favourites – those outlets that were good before are still good now – is definitely easier. The rest seems to depend so much on the people in the place at the time, which feels like a risk. It is less about the factual information being available but about real people understanding the real problem. It’s about training, education and a willingness to provide good service to all your customers.

*I don’t know whether it was an iPad or tablet by another brand, but using the word ‘tablet’ alone here would seem strange.

**This involved some switching around of items that would usually be included in the kid’s breakfast.