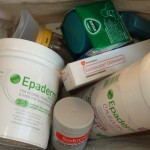 MIB woke up yesterday morning with a cold and by the time bathtime came he was suffering quite a bit, with a stuffy nose and his skin.

Between getting out of his Oilatum bath and going in his room for a story, I put on him:

1. A good slather of Epaderm Ointment

2. Sudocrem on his tummy where he has scratched a little scab off from a cut made while scratching with a broken fingernail.  Also put some on his cheek as I don’t like to use steroids on his face and it is red from scraching

3. Eumovate on his legs as he spent a lot of yesterday scratching them – I think due to the heat –and they have flared up a treat

4. Vicks on his chest and back as the poor thing can’t breathe well through his nose with his cold

5. One puff of Ventolin

7. One lot of fuss whilst we replace the plaster on his elbow

9. Pyjamas – still long ones as he refuses any mention of a vest/shorts combo.  They do prevent him itching his arms and legs so he has those on and no covers at the moment.

He was so laden down, I’m surprised he made it to his room.

On a warm night like last night, I’d love to just get him out the bath and add a nappy and cuddle.  I hope all those parents that can do that really appreciate how easy it is.