A bumpy start to the holidays

MyItchyBoy missed the last few days of term before the Christmas holidays as he was running a high temperature and was clearly not well. In an attempt to bring the temperature down, I gave him ibruprofen. Now, he’s only had it a couple of times in his little life. I can only really remember him having it during the chicken pox when, once again, we’d had trouble getting his temperature down with paracetamol alone. He was given it after much discussion about the effects – the doctor wanted to avoid it due to MyItchyBoy having ‘asthma’ symptoms (using an inhaler daily for over a year but without an actual asthma diagnosis) as apparently it can aggravate them. It was never mentioned that actually he might have an allergic reaction to it! Anyway, it was a diversion from the cold virus that was causing the temperature in the first place and luckily he only came up in hives and it didn’t develop to any other allergy symptoms.

Thankfully, MyItchyBoy was well in time for the actual festivities. Santa thoughtfully delivered some Hotel Chocolat Tiddly Penguins and some Goody Good Stuff Cola Breezes for some special free from treats in his stocking. The Cola Breezes was a big bag, so we are still metering those out.

Over the holidays we’ve had quite a few lazy days – sleeping late and late nights for MyItchyBoy. These have previously been hard work as he’s never been a great sleeper, but now his eczema has calmed down, we’re enjoying a lot more unbroken nights and he’s managed to go to bed quickly and easily without a shower and just the one easy application of cream. This has meant a lot more relaxation on our part as well as the joy of actually waking up after 9am one morning! 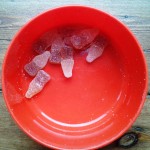 We made a trip into London to see friends over the holidays and explored the Natural History Museum with the kids. I was nervous as we’d stayed over the night before at my sister’s empty apartment so weren’t able to easily make a packed lunch for me and MyItchyBoy. However, I needn’t have worried. Despite it being busy so having to keep kids occupied in the queue for a while, the cafe at the museum was great. The kids menu was really sensible and had clear dairy and gluten free marking. The adult’s menu was also well marked, although there was one error. The staff were also understanding and helpful in finding out any further info for us direct from the kitchen. It did take a while for the food to arrive, but then, it was freshly cooked so you’d expect that. The food was good quality and I expect we’ll be back there again – even if we’re not going to the museum itself.