With heat comes the overwhelming itchiness of eczema.  Since we had such a lovely summer here in the UK there were a lot of itchy and sleepless nights caused by MyItchyBoy being too warm in bed.

I got the mini version as I wasn’t sure what it would be like. 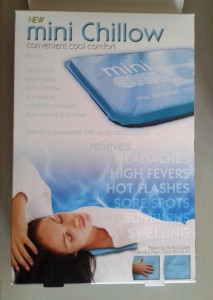 I couldn’t have guessed how much he loves it!

I ordered it in September, so I wasn’t sure MyItchyBoy would find it that useful.  However, it has been a mild September and October so far, so he is still feeling warm at night.

Mostly, he uses the Chillow when settling down to sleep. I think his skin feels itchy at bedtime due to the shower and various creams being put on which draw attention to his skin and probably irritate it a bit. Tiredness also makes him itchy. The coolness of the Chillow seems to calm him down as well as cool him down.

As far as how it works, that seems to be entirely by magic, as far as I can tell – although I am no scientist! 🙂

It is surprisingly cool day after day, after you just fill it with water the first time. MyItchyBoy is keen to get the bigger version in time for next summer, but we’ll wait and see as he is still only 5 and I think the next size up might be almost as big as he is.

We didn’t get to try it during the hottest months, but I can see that it makes enough of a difference at keeping the itching at bay at even this time of year that I am sure we’ll be grateful for it next summer.

Note: This is not a sponsored post. I bought this item myself as a result of too many interrupted nights by a too hot MyItchyBoy and given the idea by a comment on a previous post. My opinion is factual and honest and I get no benefit from you purchasing a similar item other than being happy if it helps you manage yours or someone else’s eczema and allows you all more sleep.  You can find more information here: www.chillow.co.uk