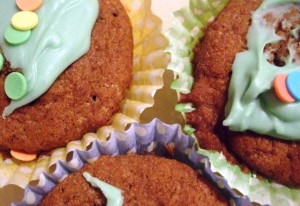 Free from cakes don't have to be boring

At dinner last night, MIB announced that he was “stuffed!”.  He’d eaten a lot, so that was fair enough.  He then asked for one of the fairy cakes we’d made earlier.  I pointed out that he was apparently ‘stuffed’.

This is indeed true.  And my chocolate compartment is usually quite full.

We’ve been doing a lot of baking here of late after MIB’s last dietician appointment.  More on that soon.  Fairy cakes seem to come out well using Orgran Egg Replacer and Oatly milk.  MIB’s choice of green icing may not be to everyone’s taste, however.