For a while now, MyItchyBoy has had trouble sleeping. 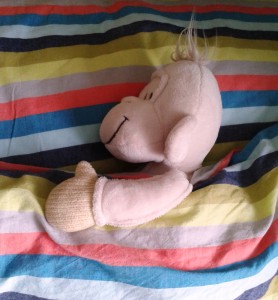 That is to say, he has no trouble sleeping when he’s asleep and is settling as well as can be expected from a procrastinating genius that all 4 year olds are.

The trouble has been that he keeps waking up somewhere between 1130pm and 3am and stays awake for up to an hour.  To start with, he complains of having itchy legs.  Of course I have to comply – what mother of an eczemateous child wouldn’t?  But after covering him in more cream I then settle back to bed only to hear him call out again ten minutes later.  More cream.  Then the same thing again.  Usually between 3-5 times each night.  Every night.

This has been going on for sometime and has started to affect the family life a lot.  Most parents will know what it’s like to not get enough sleep: there are more arguments, less energy, less focus, more colds, more things get broken (or is it just me who drops stuff all the time when I’m tired?).  So, enough to say that not a lot has got done around the house of late and we haven’t had a happy time.

Determined to solve the sleep issue, we worked to get the skin on his legs to a point where they shouldn’t be waking him up every night being itchy.  So, then what?  The issue did seem to go back to when he moved up to a full-sized single bed with all new bedding.  All of it is 100% cotton and allergy-friendly but was it still a problem?  My process has gone like this (bear in mind that at all time he has been sleeping with full-length 100% cotton pyjamas on and they are not new):

1. Put an extra cotton sheet between his sheet and the mattress protector.

4. Buy expensive cotton sheet to replace cheaper cotton (still 100%) sheet.  However, original ones are brushed cotton – I thought that would be nice and snuggly but they had actually bobbled a bit in the wash.

8. Could it be the duvet? Surely not.  We spent ages looking for and being sold the perfect duvet and it wasn’t cheap.  Don’t really want to buy another one just to see. Hmmm…

9. Dug out old, very thin duvet that we used as a playmat for MyItchyBoy when he was a baby and used to puke over the carpet if it wasn’t covered and he’s since used it for making dens and in the garden.  It is paper thin.  And not allergy-friendly…but still.

10. Put old duvet in duvet cover – it barely reaches the sides.  Cover MIB with that, then use uncovered proper duvet sideways to put over the top and tuck down the sides to keep him warm but not have it near his skin.

Two days now.  One he slept all through and last night only woke up once at midnight for more cream, but he wasn’t under the older duvet.  He went back to sleep straight away after I’d tucked him back in under both of them.

So, was it the bedding?  Which change was it?  Was he just getting cold in the night and actually it was the two duvets that stop him waking up and then feeling itchy?  I have no idea.  I have bought another smooth sheet though which am washing before use today.  I’m also going to put both duvets in the duvet cover while he’s at nursery.  Will keep the old one closest to him.

Have you been in this situation?  What did you do?