MyItchyBoy recently had a bad flare-up.  Luckily we are now getting through the other side and he is sleeping a few hours longer.  Although his skin has calmed right down it is still super dry.  The itching is coming from the scabs that have formed over the worst scratches as well as the general dryness.

Since we are struggling with our usual emollients that, at the moment at least, don’t seem to be working their usual magic, I decided to try something different.  I saw Scratchsleeves on a stand at the Allergy Show but they didn’t have any big sizes in stock.  Luckily, when searching for the same thing (without remembering the name!) I finally found a pair on Amazon. 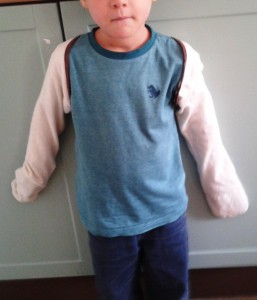 Well, the packaging gave me the proper website: www.scratchsleeves.co.uk, where you can see a good explanation as well as some useful info.  However, essentially, they are a sort of short cardigan with covered over cuffs.  Over the 4-5 nights that we’ve been using them, we’ve noticed a big difference in MyItchyBoy’s skin.  For a start, the scabs are not being picked (as much). This is a breakthrough in itself.  They have also reduced the general itching and the damage that the scratching causes has therefore also dramatically reduced.

With the Scratchsleeves on, he can still rub at his skin, but he can’t scratch in a way that tears at the skin.  If he does pull them off in the night to really give himself a desperate scratch, that is a lot less time than he would usually spend scratching idly because he’s not yet asleep.

According to MyItchyBoy, the good points, are:

He reckons the only downside so far is:

Yesterday, we discovered how useful they are during the day as well.  MyItchyBoy was watching a video on my laptop while I was cooking and whereas usually he’d just sit there and just idly scratch, he put the Scratchsleeves on.

It was interesting to watch him fidget but not actually scratch his skin.  It made me realise how much of his idle scratching is habit and perhaps just fidgeting (Husband and I are quite fidgety people).  It was good for him to realise that they are not just for bedtime, but can be useful whenever he thinks he will be scratchy.

This is a post entirely sprung from my love of sleep and happiness that something is stopping my little boy tearing his skin apart.  If you are having trouble with an itchy child, do consider checking them out.