This morning, putting cream on MyItchyBoy, I felt very emotional.  Why?  Well, this morning, about 80% of his skin feels weird.  Yes, weird.  Perhaps not to a parent whose child has never suffered with eczema, but for me, it feels weird.  His skin is smooth and soft and almost silky feeling.  Most unusual.

After a week of medication: antibiotics, oral steroids, topical steroids a change in shower cream and many applications of emollients, our little boy is starting to look, well, normal.

The upsides are immeasurable.  Firstly, he slept straight through the evening and night three times in a row.  That’s something that hasn’t happened for about ten months.  Husband and I have had uninterrupted evenings and a full night’s sleep now for 6 days in a row (there have been a couple of nights I’ve needed to get up briefly with MyItchyBoy to find a lost bear or pee break but they’ve been a few minutes long and nothing compared to what it used to be like).  Not once has he woken up in distress or asking for more cream on.

Secondly, the itching has pretty much stopped.  My own theory is that what happened to his arm (he scratched and scratched and it got infected) has scared him.  He is occasionally scratching, or picking at scabs, but being very wary about it.  However, it’s more likely that he’s actually not that scratchy right now.  His skin is looking really good apart from the scabs still healing from the infected areas.

Because he is far less itchy, he’s keeping his Scratchsleeves on all night.  That in itself is great, considering how hot it has been of late, but they really do help to keep the scratching under control.

The lack of scratching and the sleep have made my usual monkey into a pretty standard four year old who’s funny, laughing a lot, reasonable, helpful but with the occasional bout of cheekiness.  This is different from the usual grumpy, intolerant, shouty eczema-ridden, tired boy we often have to deal with. 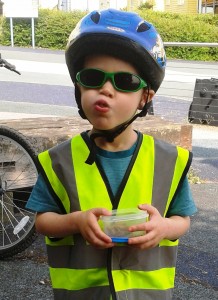 MyItchyBoy with mouth full of flapjacks on our weekend cycling trip

So, for now, we are all super happy and had a great family weekend together.  However, I know it is not likely to last for long.  So, while I will enjoy it while it lasts I know it will also take a lot of work to keep up the fight against the eczema coming back in full force.