Last night I went up to clean my teeth on the way to bed and passed MyItchyBoy’s room.  That sinking feeling came over me as I heard the *khuh-khuh* noise of MyItchyBoy scratching his skin.

I poked my head round the door to see him lying on his bed, pyjamas legs pulled up, giving his skins a good scratch.  His sleeves were pulled up too – not great as he’s been picking away at a patch on his inner elbow all week.

When I said to MyItchyBoy ‘Oh dear, let’s put some cream on’, he responded with a grumpy and emphatic ‘no!’, pulled his sleeves and pyjama legs down and turned over.  He let me put his Scratchsleeves on and tuck him in, but was defiant with regards to emollients.

The thing about having a child with eczema is that you want to help but you’re not always able to.  I don’t mean the general helplessness of dealing with eczema on a daily basis, but the fact that as your child grows up, they ge 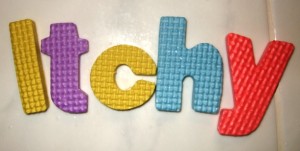 t their own opinion on how they think it should be managed.

Now, he’s not a big child, I can apply the cream if necessary (I know this as has been done) but in this instance, I knew the likely case was he’d wake me up in the night for cream on if it got really sore (just another interrupted night for me).  The worse case is that he’d scratch the skin until it’s bleeding and then we’d deal with it in the morning.  As it was, he woke me up in the night just to be tucked in again.

However, it is hard to leave him without cream on, to not do what I really want to do to help him.  He is 4½, old enough to start to understand the consequences of scratching for ages (the discomfort, more cream on in the daytime – which he finds an inconvenience too) but still too young to always make the right decision.

The thing is, we encourage his independence in almost all other areas of his life.  We trust him to decide whether he’s hungry or thirsty, when he needs the toilet and how many biscuits he thinks he needs.  Ok, so he does get all these things a bit wrong sometimes but he learns from them.  They are all part of learning how to make the right decisions.

The difference is, if he doesn’t make the toilet in time because he was too busy playing, I don’t take it personally.  It certainly doesn’t consume me with guilt and stress the way it does when he refuses cream for his eczema.